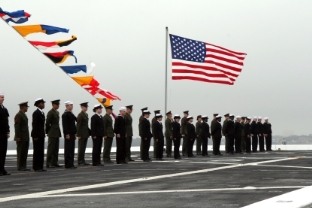 In a recent statement, the Pentagon announced plans to expand its MAVNI program (Military Accessions Vital to the National Interest program). The program, known as MAVNI, is only open to those with critical skills in specific medical fields or who are experts in certain foreign languages. Recruits are normally awarded U.S. citizenship by the end of their 10-week basic training, entirely bypassing the permanent residence process.

When it began in 2008, it granted authority for the armed forces to recruit up to 1,500 immigrants who possessed specialized skills. The Pentagon’s most recent guidelines about the program increase that figure to 3,000 recruits for fiscal year 2015 and 5,000 in 2016, according to the New York Times.

Once implemented, the expansion will directly impact the Navy, who relies heavily on MAVNI recruitment. Of the currently authorized 1,500 recruits, the Army has been allocated 1,300 slots. In 2013, Military.com reported that the Air Force recruited just two people under the program, both brought in for their linguistic skills. The Navy recruited one doctor in 2009.

This is hardly the first major development to occur since MAVNI’s creation. Back in September, the Pentagon opened the program to undocumented migrants who had been granted deportation protection under the 2012 Deferred Action for Childhood Arrivals (DACA) policy. Prior to 2014, MAVNI was available only to Legal Permanent Residents living in the United States.

Department of Defense (DOD) spokesman, Lt. Cmdr. Nate Christensen, told Fox News Latino, that undocumented immigrants who want to join the military under MAVNI must demonstrate “expertise in a field that the DOD considers vital to the national interest.” Finals details are still being hammered out regarding the screening process and candidate selection process.

We have talked with Foley Law clients with family members in Syria, Iraq and Afghanistan in the hope of introducing them to the MAVNI program. If you know of anyone overseas with the language skills necessary for this program, please feel free to contact Jessica Lang, Esq. at Jessica@FoleyLawOffices.com for more information.