Education of An Idealist 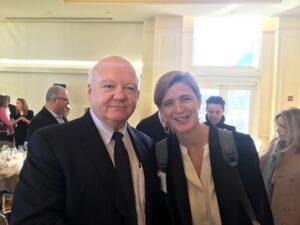 I had the good fortune of spending a little time recently with the former U.S. Ambassador to the United Nations, Samantha Power. She was the guest of the Irish American Partnership at its annual women’s Christmas breakfast.

Ambassador Power was born in Ireland and her Irish heritage is very much a part of who she is today. Before she became President Obama’s U.N. ambassador, she was a Pulitzer Prize winning journalist. She is now teaching at the Kennedy School of Government at Harvard University.

Ambassador Power was at the Partnership breakfast to talk about her latest book, The Education of an Idealist.

Her book (and the late night comedy of Stephen Colbert and Jimmy Kimmel) has helped me survive the daily atrocities of the Trump Administration. When you read about the forethought, diligence and planning that went into U.S. foreign policy during the Obama Administration as compared to the shoot from the hip, attention deflection policy now on display, you should be embarrassed as a U.S. citizen. I know I am.

The Education of an Idealist is going to be a fantastic movie. It will open in an Irish pub with a little girl kicking a soccer ball off a wall and end with that same little girl, now a woman, walking out of the United Nations building in New York with a son holding one hand and a daughter the other. It is simply a great and uplifting read and I couldn’t recommend it higher.

The Boston Globe’s Kevin Cullen was at the same Partnership breakfast and Ambassador Power and her book was the subject of a recent column: https://www.bostonglobe.com/metro/2020/01/09/the-education-empathetic-policy-maker/YvtlB4VvPNQIznqEcicRpN/story.html?event=event12