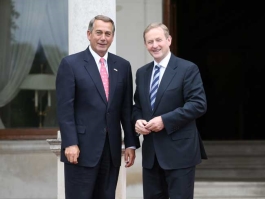 House Speaker Rep. John Boehner (R-OH) traveled to Ireland last week to meet with Taoiseach Enda Kenny and Minister for Foreign Affairs and Trade, Charlie Flanagan, for talks about US-Ireland links. They discussed the Irish economic recovery, immigration reform including the plight of the undocumented Irish in the US, and the situation in the North. While many republicans have argued against moving forward with immigration reform, Boehner has expressed an interest in taking up the highly controversial issue.

During remarks made after the US-Irish talks, Minister for Foreign Affairs and Trade, Mr. Flanagan described it as a valuable exchange of ideas, and noted the long and successful history of cooperation between Ireland and the US on international issues. Flanagan reaffirmed the Irish Government’s commitment to work closely with the Speaker as part of its active engagement on both sides of the aisle in Congress.

Seven other members of Congress accompanied Mr. Boehner on his visit to Ireland, just days ahead of Independence Day. The U.S. Ambassador to Ireland, Kevin O’Malley, was also in attendance. Mr. Kenny praised the ambassador for his work in “building the links” between Ireland and the United States.