Republican U.S. Senator: Immigration “Deal to Be Had”

I had a brief conversation with U.S. Senator Daniel Sullivan of Alaska earlier today. I asked the first term Republican about changes in U.S. immigration law and he said “there is a deal do be had on DACA (Deferred Action for Childhood Arrivals)” but it had to come from Congress and “we have to secure the border at the same time.”

Speaking at a luncheon meeting of the New England Council while he is in town for his Harvard University 30th class reunion, Sullivan said “there is the framework for an immigration deal in Congress” but he stressed “we need to keep it simple. He can’t try to solve all of the immigration issues at once.” 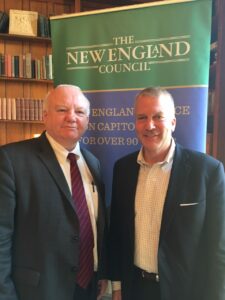 Sullivan, a lawyer, former U.S. Marine and Assistant Secretary of State said he “was opposed to pulling out of NAFTA (North American Free Trade Agreement)” and was in favor of entering into “a free trade agreement with Japan.”

Sullivan called Iran “the biggest terror state in the world” and he said Iran had been “cheating on the agreement before the ink was even dry.”