Portland and The Irish: Stories Worth the Telling 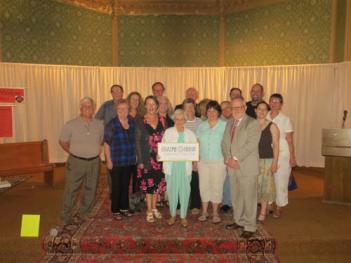 It is a short ride up the highway from Boston to Portland – two hours, maybe a little more – and it was to that fine destination that I found myself joining a couple of friends one weekday August morning for a quick excursion to his wonderful waterfront city along the Maine coast.

The initial purpose was to join Portland native John Phillip Foley and Ireland’s Consul General in Boston, Breandán Ó Caollai, to meet that state’s senior US Senator, Susan Collins, at a downtown luncheon hosted by the New England Council. The event was held in the Preti Flaherty law offices in a conference room offering sweeping views of the Old Port district, Portland Harbor, and the nearby islands.

The consul general had the opportunity to meet with Collins and discuss immigration reform and other issues. The senator, considered one of the few remaining moderate Republicans in Congress, has deep Irish and English roots on both sides of her family. A onetime aide to former Maine Sen. William Cohen, she served in Boston for a brief time in 1992 as regional director of the Small Business Administration, and later worked as a deputy state treasurer under former Massachusetts Treasurer Joe Malone. She returned to her home state and was elected to the Senate in 1996, filling the seat once held by Cohen.

Following the Collins’ luncheon, John Foley and I joined the consul general and his wife Carmel for a visit to the Maine Irish Heritage Center, which is located in a former neighborhood church, Saint Dominic’s. “Saint Dom’s” was Foley’s boyhood parish boasting the third oldest church in the state. At one time it was home to the largest Irish Catholic parish north of Boston. It was a visit both memorable and moving.

In 1997, the Diocese of Portland closed the church. According to a brief history published by the center, the city in turn gifted the property to the Irish:

“The beacon to all and community gathering place was purchased by the City of Portland and gifted to the Irish American Club and Friends of St. Dominic’s. Thus was born the Maine Irish Heritage Center, whose purpose is to protect, preserve and restore the historic landmark that was formerly St. Dominic’s Church, to provide a meeting place for Maine’s diverse communities, and to promote Irish culture, history and heritage by telling the story of the Irish and Maine.

“In January of 2003, the City of Portland presented the keys to the building known as the Irish Cathedral to the Maine Irish Heritage Center. With one in six Mainers of Irish descent, its importance as a place of living history is much valued and now holds a place of honor in the state as the Center for all things Irish in Maine.

“The Maine Irish Heritage Center was closed for the most part from May 2006 until the fall of 2008. The 4,100-pound bell fell from its moorings in the tower and then a Patriot’s Day storm wrought severe damage and havoc on both the exterior and interior. The building reopened amidst much fanfare in October 2008, with Eamon O’Cuiv, grandson of the famous president of Ireland, Eamon De Valera, presiding.

“Today the bell rings proudly over the Greater Portland area, a testament to the grit and determination of the early Irish who came to Maine, to their descendants who continue to make the State of Maine a place to call home, and to Maine’s new immigrants as a safe harbor in America.”

It was truly a fascinating facility! The building retains all the church characteristics of old St. Dom’s, with beautiful stained-glass windows and rows of the original pews still in place on each side of the main aisle, beneath soaring 60 foot cathedral ceilings. The room off the altar area, once a sacristy, serves as office space and houses an ever-expanding library (For his part, John Foley brought four cases of books with him that day.)

Downstairs, in a huge area which once served as the lower church, there’s function space for upwards of 200, offering regular Irish dances, lectures, and other performances.

A group of some two dozen members found their way to the heritage center that afternoon to greet Ó Caollai. Among those attending were MIHC chair Mary McAleney, second term president Kathy Reilly (herself a St Brendan’s Dorchester girl!,) past president Brendan McVeigh, Professor Michael Connolly and club historian Matthew Jude Baker, among others. Some of them are pictured in this issue.

Portland has developed a reputation as home for fine dining and pleasant city life. If you’re going to visit the city, make plans to visit the town’s own Irish Heritage Center. It’s worth the trip!

For more details, visit online maineirish.com. The Maine Irish Heritage Center is located at 34 Gray Street Portland ME 04102. The phone number is 207-780-0118.

(Correction 8/29/14- This story was edited online to correct the name of the current president.)