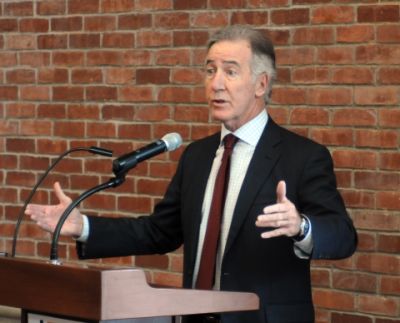 Congressman Richard Neal gave a lecture at Nutter, McClennon & Fish LLP. in Boston’s Seaport District on Tuesday, May 12, 2015. Foley Law Offices’ primary attorney, John Foley, was amongst the notable attendees. In the wake of immigration reform and tax season, Nutter’s choice in selecting Congressman Neal as a guest speaker was ideal.

The Congressman spoke of the intransience in Congress and the frustration of identifying issues without being able to resolve them. He expressed a need for immigration reform; without a fresh flow of immigrant workers, our economy would come to a halt. “All you need to do is go into a restaurant kitchen or an office building at night to see the changing demographics of America. Congress needs to recognize this and take action.”

Congressman Neal was born and raised in Springfield, Massachusetts and now represents the First Congressional District of Massachusetts in the United States Congress. Richard Neal was first elected to the United States House of Representatives in 1988. He is a senior member of the tax-writing Ways and Means Committee and the Ranking Member of the Subcommittee on Select Revenue Measures. He also serves on the Ways and Means Subcommittee on Trade. He has a long legislative history of fighting to preserve and protect Medicare and Social Security.

Congressman Neal is also the Chairman of the Ad Hoc Congressional Committee For Irish Affairs. Attorney Foley plans to host him at the Irish Cultural Centre in Canton, Massachusetts this fall where Congressman Neal will discuss the role of Irish-America and the ongoing struggle for peace and justice in Northern Ireland.