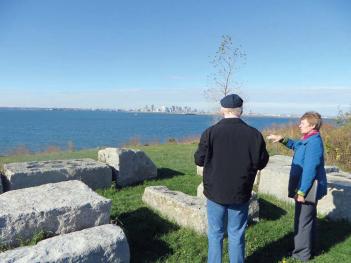 There has been some progress in developing a plan to establish a memorial in remembrance of the hundreds of Irish Famine-era emigrants who lost their lives before reaching the mainland of Boston.

In 1847, the city of Boston opened a quarantine station on Deer Island in Boston Harbor in 1847 for the treatment and cure of thousands of Irish who had made the long ocean journey to escape the Great Hunger. While many survived, some 900 died and were buried in graves on the island, located just off the town of Winthrop. The island is now accessible by a causeway, and currently houses Boston’s huge wastewater treatment facility.

Some twenty years ago, as Ireland approached the 150th anniversary of the Famine, a Duxbury couple, Dr. Bill O’Connell and Rita O’Connell, gathered with some friends plan a memorial to those interred on the island. Forming an ad hoc committee named the Deer Island Famine Memorial Committee, they began a long-term and as-yet unfulfilled quest to establish a permanent remembrance there.

Dr. Bill passed away in January 2014, less than two years after Rita had lost her long fight with cancer. In tribute to them, some of their friends in the Boston Irish community have resolved to revive their plans and move them toward completion.

Currently, I have joined with the attorney John Philip Foley, the historian Catherine Shannon and Irish Consul General Breandán Ó Caollaí to review the plans and find a way to move forward. Our group has been aided greatly by the staff of the Massachusetts Water Resources Authority (MWRA), which has jurisdiction over Deer Island, where it operates the wastewater facility.

On Thurs., Oct. 30, John Foley and I joined with MWRA staff for a site visit to the island. There, we found that the graveyard where the Irish rest is on the easternmost tip of the island, and that the MWRA has identified a site closer to the city, high atop a berm that overlooks the harbor and affords a spectacular view of the Boston skyline.

Standing at that site on that mild, sunny, late fall morning, watching airplane after airplane cruising in on their final approaches to Logan Airport – the daily Aer Lingus planes fly in right overhead – it was chilling to pause and imagine just how close those poor souls had come to their dream of starting their new lives in America.

There were no skyscrapers to be seen back in the days of the quarantine, but almost certainly those sick and dying in their holding pens would have been able to see the lanterns in the bell tower of Old North Church in Boston’s North End, the same lights that illuminated the night for Paul Revere and the patriots who had ensured freedom for all who would live here on American shores.

The organizers of this renewed effort to fulfill Bill and Rita O’Connell’s vision have recognized that it is a dream most worthy to complete. The thinking now is to establish a marker high on that island hill in the harbor, and also to add a more prominent display somewhere on the shoreline, in South Boston or Dorchester. For example, the thousands who visit Castle Island and the Kennedy Library can easily look across the brief expanse of the harbor and see that Deer Island berm, and when they do, maybe they will pause to consider just how close those souls now interred came to fulfill their dream.

A display on Deer Island, coupled with a memorial marker along Boston’s shoreline, could well be a fitting way to memorialize the famine’s history in Boston Harbor – and it would be a wonderful way to fulfill the cherished hopes of the O’Connells and the others whose dreams, one day soon, could be realized.